Days are getting shorter and there’s finally a chill in the morning air here at Englefield heading into September. After surviving last week’s barrage of wind and rain we’re enjoying clear, sunny days and light winds – a welcome change!

Fishing continues to be steady with anglers finding chinook in the majority of the usual spots. Now that the weather is cooperating a little more, boats are heading back offshore to fish Denham Shoals at both the South and West Pinnacles for salmon. One of our guides, “Big Mike” Lemmers took his two guests to the South Pinnacle yesterday afternoon and had a great session on chinooks, using Tomic Plugs. One of Mike’s guests, Dale Dye, landed a gorgeous 29lber, amongst others. They also played and unfortunately eventually lost a fish somewhere in the mid 30lb range. Even though that fish got away, hopefully it makes it back to its home river to spawn some more potential tyees. A great afternoon by anyone’s standards!

There is so much pristine water to fish here at Englefield. Hibben Island is at the center of our area and provides not only great fishing areas, but sheltered spots on those days where the wind gets up. 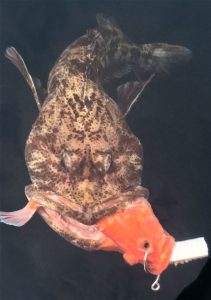 Coho are still moving through and guests have been encountering most action in northern areas. Percy Point through to Boomchain Bay has seen some decent numbers of coho, and now that we can get out into the open, we’re expecting to see some more numbers from areas like Willy and Lihou Islands.

Halibut fishing has been literally non-stop. Boats that are venturing away from the regularly fished areas are reporting halibut in ridiculous numbers, from chickens to some big mommas in the 150-200lb range which are mandatorily released. Those big girls are great to encounter and watching them swim off is a fantastic sight to see after fights that can last for a half hour or more. Nolan Ladouceur locked into one of these giant fish yesterday along with his parents on board, and by all accounts his arms are now 2 inches longer after the battle and eventual release. Well done Nolan! You know the halibut fishing is good when your first rod hooks up before your second bait even hits the bottom – insane!

Plenty of varied rockfish are still being caught while chasing halibut and other species, as are lingcod. While chasing some white fish yesterday, Dirk and Marilee Vanpoelgeest released a 50+lb ling. Great release! Lingcod are GREEDY and have no qualms about latching on to your unlucky rockfish as you’re winding them up. They’ll hold on right to the surface and it’s always a tug of war and battle of wills. In the end, as we’ve mentioned before, it’s good practice and stewardship to release those big lings as a fish over the 25-28lb mark is likely a big old spawning female and not necessarily the best table fare.

Two more trips to go and our 2019 season will come to a close. We look forward to seeing you all up here with us, either this season or next, for some great fishing and enduring memories.